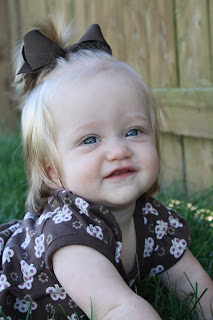 Wow - 8 months!! Daphne has really changed over the last month!! She is officially crawling - as of about 2 weeks ago. At first she just crawled around whatever room she was in - now, however, she crawls EVERYWHERE!! She seems to like the kitchen right now - maybe she likes the feel of the cold tile on her legs. I don't know, but whether someone is in the kitchen or not, she often crawls there and just sits.

Now that she is great at crawling, Daphne is trying to pull herself to standing. For now she uses things like a stool or basket or her sisters to help her stand up. It won't be long, though, before she can pull herself up to the couch.
She says, "dadadada." She has no idea what she is saying, but she can say it.
She is perfecting the art of spitting! It is lovely, really. If she is not eating, she is spitting drool. If she is eating, she is spitting her food! She tends to spray whoever is feeding her. Nice, I know.
She pretty much likes any food we give her. Her favorite seems to be watermelon. At first I just pureed it and mixed it with her cereal. This week, I cut it into tiny pieces and she ate it. I also put it in a Sassy Teething Feeder - which she loves!! She is taking all bottles now - but she is a pokey eater!! She is often so distracted by what is going on around her that she doesn't want to eat.
Daphne's top 2 teeth popped through over the weekend. She was incredibly fussing for several days so we are thankful to have a break for a little while!! (Side note, Norah's 2 bottom teeth are loose and we just noticed this week that she has permanent teeth coming in behind them. She is wiggling the teeth like crazy so we don't have to pull them!!)
When she smiles she often wrinkles up her little nose - totally cracks us up!! She is becoming quite the ham and we are enjoying every moment with her!!!

Such a cute picture! I can't believe she's crawling...it's been too long since I've seen her!

Wow. Time flies. Seems funny that she is doing now at 8 months what Morgan just learned to do not long ago around 13 months. It's a fun stage, isn't it? Tiring, yes. But fun. Thanks for the encouragement, by the way, with the nap thing. How old were your girls when you actually went to one nap?

Wow, it seems forever since I've seen her... or seen her up and active I guess! HA!
I can't believe she looks like such a big girl!! Great picture :)

Thanks, Heather! I would like to try to touch the picture up in photoshop, but I'm a little overwhelmed with where to begin. I tried downloading actions from Pioneer Woman, but had some issues. I guess I'll try again at some point!!