I have been working on our storage space in the basement for a long time. . . .I mean, years. We have been in our house for almost 7 years but never utilized the space the way I wanted. I would start organizing and rearranging and then it would again become a collect all. Then I just sort of gave up and just continued to add to the mess and never put anything away. Ridiculous, I know. Finally, however, it got to the point that I couldn't walk from one side of the room to the other without hurdling over things.
As embarrassing as they are, here are the before pictures: 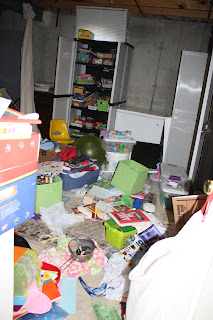 Notice that I didn't even shut the cabinet doors. How lazy is that? 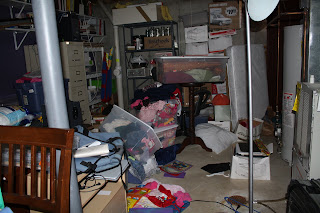 The first step of the process was to take all the stuff out of the room. We literally took everything except the large furniture out into the school room. The plan was to have it completed by the end of our Christmas break. . . however, I didn't get it all finished so we did have school in various places the first week of January. Anyway, I started by arranging the shelves and cabinets where I wanted them and Kevin added a few extra things and moved the heavy stuff. Then I organized the clothes - with 3 girls and 2 nieces (plus a couple of friends who have passed along clothes) we have a lot of clothes of various sizes. I sorted them, thinned out, boxed them and labeled them. Then I organized all of the craft/sewing/art stuff. 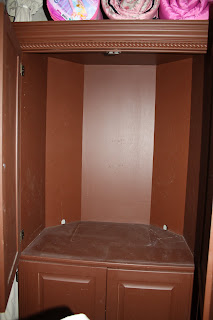 We had this tv cabinet from our other house that has been in the basement as storage. There were things it it, but they were literally thrown in and stacked on top of each other. We never used it anywhere else because it is a corner cabinet and there just isn't a good place in the rest of the house. 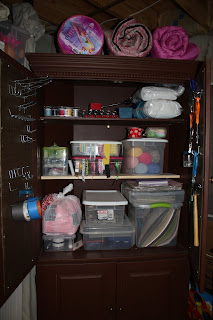 Kevin added some shelves and peg board to the cabinet and voila! It is the perfect craft/sewing storage cabinet!!
I should add that there were times when Kevin and I were both working in the basement (or I was working in the basement and Kevin was at work) and the girls were just playing. Daphne wanted to help. . . .with everything! This is what she was doing most of the time: 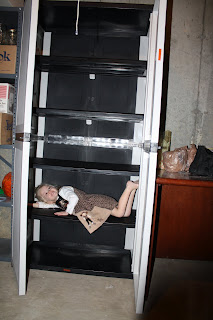 After a couple of weeks of work, it is done. For the first time in 7 years, there aren't just areas that are organized. The whole storage room is clean and organized. I love it. Here are the after pictures: 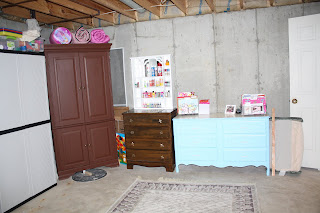 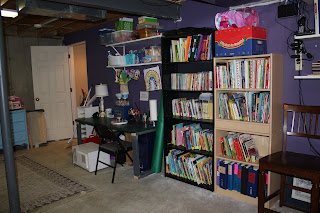 To the left of bookshelves is an art table (ignore the white microwave underneath - that is gone now). The girls love that they can go in there and paint, glue, cut, and create. I love that it doesn't matter if they make a mess!! 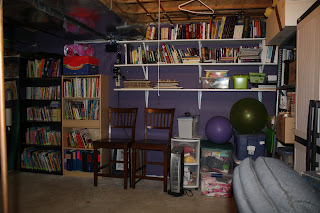 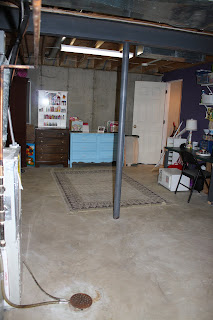 The pictures are great and the basement even looks better in real life. What a huge accomplishment. The girls are also so proud of it and loved showing it off.

WOW! way to go! Feels SO good to get things like this done!