After reading Nicole's blog and then hopping over here, I decided to also take the "Yes" Mom Challenge. Daily I tell my kids no they can't do something because I don't want to deal with the mess or the clean up or because it is just easier to do myself. I am going to try to let my kids do more fun, messy things that they ask to do.
I actually already had an opportunity to say "yes" to my kids today. Lucy asked to wash the dishes today. I realize that I should look at this as a great time to teach her some responsibility, but normally I would tell her "not right now" because it is less messy and goes much more quickly if I do it myself (our dishwasher is broken, by the way - has been for about 2 months). Today, I decided to let her help and she had a great time and she worked really hard. Norah also asked to help with something so I let her snap the green beans for dinner. She, too, worked really hard and I only have to do 1/2 the bag! There are green bean ends all over the counter and floor, but who cares!!
As Nicole and Jill Savage stated, this is not about permissive parenting. Our kids obviously need boundaries, but it is about saying yes when we are only saying no for selfish reasons!!

Posted by Heather S. at 5:05 PM 1 comments Links to this post

First - check out Heather's blog. She watched my girls today and posted some cute pictures of the kids. She took some great ones of Daphne!!

Second - so my photo blog has become my "once in a blue moon photo blog", but check it out.

Tooth number 2 is finally in!!

I feel like we have had a MILLION things going on over the last couple of weeks.

Norah and Lucy started swim lessons last week. While the first day or two didn't go so well with Lucy - they are both doing great now and loving it. I think I am going to sign them up for another session in a few weeks.
Max came into town this week. He had a booth for Foreign Language Friends at the St. Charles Homeschool Convention. Kevin stayed home on Tuesday and we had our babysitters come over on Wednesday so I could help Max at the convention both days.
My training for the triathlon is going well for the most part. I haven't been swimming as often as I like, but the running and biking on right on target. Some friends of ours found me a triathlon bike to use - it is amazing how different it feels from my mountain bike. Last week on my mountain bike, I rode 6 miles in about 40 minutes. On Saturday, I rode 7 1/2 miles in about 40 minutes - not bad. Although I think I have a heavy head because my neck was so sore by the time I finished riding. Maybe my helmet is too heavy and since I am leaning really far forward - it just feels strange! I have been consistently running 3 miles - so I am ready for that leg of the race. I just need to make for of an effort to swim.
Now that Daphne is rolling both ways - she is all over the place. I lay her on a blanket - which is really pointless because she won't stay on it. She is my earliest mover - for sure. Even though Norah could roll over, she didn't very often and Lucy rolled over later than Norah.
I will try to post pictures soon!

What Does Your Lipstick Say About You?

Check this Lipstick Profile out!

Posted by Heather S. at 9:59 AM 0 comments Links to this post 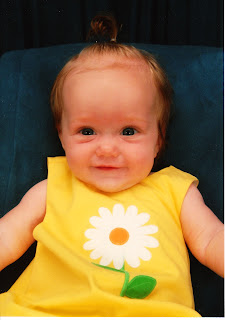 I know it is hard to see on the computer, but she has her first ponytail on top of her head!!!
Oh my goodness - how can Daphne be 5 months already? It is hard to believe, but we are enjoying every minute with her. She is a happy, easy-going baby - as long as she gets her sleep (she has some true Leitch blood). She does get a little bored when her sisters are not available to entertain her - which doesn't happen often. It seems like someone is always hovering over Daphne providing her with nonstop entertainment!
Now that the rolling over things is old news, Daphne just sleeps however. Sometimes she sleeps on her tummy, sometimes her back and sometimes her side. When she first wakes up from a nap or nighttime sleep, Daphne never really cries. She just coos and kicks her mobile. Most mornings we hear the mobile being kicked before she even makes any noises.
Speaking of cooing . . .some of Daphne's newest sounds include: yayayayay, mmmmmmm, gu, oooh, aaah, mum
Just noticed - One of Daphne's bottom front teeth is finally in!! The second one is close!

Posted by Heather S. at 9:52 AM 2 comments Links to this post

I'm not great at surprises - in fact, I pretty much NEVER plan them because I usually spill the beans or mess something up. This year Heather and I decided to plan a surprise camping trip for our husbands. Kevin and Ryan had been talking about going this summer and the kids were asking too. I knew if we could pull it off, Kevin would be really surprised, because I don't camp often.
Heather and I decided on a weekend and a park. Norah and Savannah made books about camping for their dads. The last page said, "Surprise! We are going camping tomorrow!" Heather scanned in Savannah's book and posted it here . We had dinner on Wednesday night and the girls gave Kevin and Ryan their books.
The kids really did great! They were awake later than anticipated on Saturday night (that would be thanks to Lucy who was WIRED), but all in all they slept great. Daphne had a hard time falling asleep at night and didn't nap as much as she would have at home, but once she fell asleep at night - she slept all night! Because of the lack of naps, Daphne cried more than normal. Kevin actually thought she did fine.
We really didn't do a lot while we were camping. No hikes this year - I forgot the Baby Bjorn. The kids went swimming in a little water hole - totally grossed me out, but Kevin thought it was fine (I did make them take showers immediately following and again at bedtime! Ha!). The kids rode scooters around and basically just played together the whole weekend. There was a nice playground right in the middle of the campsites - perfect for us. The kids got along great - it amazes me that they pretty much never have any squabbles.The weather was INCREDIBLE and the park was very nice. We had great food and fun with the Morrisons!
The only issue we had (well, besides Lucy keeping her sisters awake on Saturday evening) was Norah waking up wheezing and coughing in the middle of the night on Saturday. Totally freaked us out. She hasn't needed any breathing treatments in almost a year, so totally forgot to even take the nebulizer. The more she coughed, the more she cried and the more she cried, the more she coughed. Nice. We were able to get her calmed down and got her to drink some water and she finally went back to sleep. Kevin and I didn't sleep very well because we kept checking on Norah. We decided we needed to head out as soon as we could pack up so she could get home and start her breathing treatments.
We were home by lunchtime and the girls rested in the afternoon. I think by now they have completely recovered from a lack of sleep and Norah is talking about the next camping trip (which Daphne and I may skip out on).

Posted by Heather S. at 8:05 PM 3 comments Links to this post

I know I haven't posted much recently, but we have been incredibly busy! Before we know it the summer will be over!! Norah is really enjoying a VBS day camp this week. She is EXHAUSTED, but is having a great time. On Monday the kids jumped in a bounce house with a slide and Tuesday they bungee jumped. Not exactly sure what it looked like, but she said they had a harness around their waist and legs and jumped up and down on a big trampoline. Sounds fun!

In a way Lucy is enjoying some time without Norah, but on the other hand, she seems a little lost. Yesterday we went to the park - Lucy just stood at my side for a long time. It was like she didn't know where to go or what to do.
The girls start swim lessons next week and they are very excited about that! Norah didn't really enjoy them last year - so we will see. She really doesn't like putting her head under the water.
I have lots of pictures to post - just need to take the time!!

Posted by Heather S. at 7:02 AM 0 comments Links to this post

Last night she was awake about 3 times because she rolled herself over. Then today during EVERY nap, Daphne rolled herself over, then would not go back to sleep. Let's just say Daphne was not a happy camper today. Hopefully, this phase will go quickly.

Posted by Heather S. at 7:30 PM 3 comments Links to this post

No One Said Parenting Was Easy

I know I haven't posted recently - we have had a rough week with Norah. I'm not going into too many details - I know Grandpa Steve doesn't like to read the negative things about his grandkids. Let's just say we are experiencing some behaviors that are typically seen in 2 year olds - but Norah never did as a 2 year old.

We (when I say we, I mean me - Kevin was at work) were faced with a situation today that was incredibly frustrating. We have taken things away from her and sent her to her room, but nothing has worked. Today I had had ENOUGH.
She was supposed to go to a birthday party tonight of one of her good friends from church. Since it was time to step it up a notch and I told Norah, "You are not going to the party and I am calling Kate's mom now." I called Karen right away and told her - I knew if I didn't call right away, I might change my mind.
So in the end. . . Lucy and I went to the party (the whole family was invited) without Norah. It was a really tough decision because I knew Norah would be DEVASTATED, but she has to learn that she has to be kind and obey.
Hopefully, the rest of the weekend will go smoothly.
On a lighter note, Daphne is now rolling over both ways. She is now a girl on the move. She hasn't figured out yet that she can get to something she wants, but it won't be long!

Posted by Heather S. at 7:50 PM 5 comments Links to this post