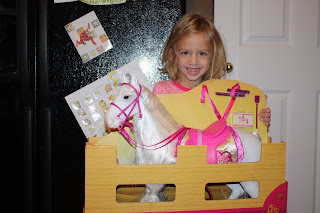 For the second time, Lucy has broken her finger sucking habit! Hopefully it will stick this time!! The dentist suggested letting her pick out a toy as a reward for not sucking fingers. She picked out that horse (she is serious about her rewards) and we put it on the piano so that she would see it everyday. She kept a chart and every morning when she woke up if she had kept her gloves on all night, she put a sticker on it until she filled it up. Sunday was the last day of the chart so we gave her the horse. She did fantastic - she didn't really even whine/argue much after the first night.

Two down, one to go.

She looks so grown up :)